Our website hosting company, "1and1" recommends using either Google Chrome or Mozilla Firefox to browse the Internet and view our website. Some photo galleries may NOT be viewed when using Internet Explorer, IE.

When viewing photos of past events, you can click the “full screen” icon  on the bottom right of the slide show panel.

34 GBBCC members attended the fifth AGM, held in the Timber Room, Swiss Chalet, Collingwood.  The following members were re-elected or elected as the new Executive for 2011:

After the AGM, the regular monthly meeting took place with very good participation by GBBCC members who described some of their winter projects as well as various car stories.

Thirty seven GBBCC members attended the January meeting at our new location in the Timber Room at Swiss Chalet, 440 First Street, Collingwood.  After the regular meeting topics, there was a social break followed by the showing of a movie on the history of the MG marque.

Fifty one GBBCC members attended the annual Christmas Party upstairs at Kelsey's on Tuesday evening, despite the dreadful winter weather.  It was a very successful event and everyone appeared to enjoy themselves. The food and the company were very good.  As part of the month of "Movember", Rick Crawford raised about $1,200 for Prostate Cancer and GBBCC members contributed an additional $90 towards the fund.  The Food Drive was very successful and on behalf of GBBCC, Bill Rogers and Graeme Wallace delivered two car loads of food to the local Salvation Army office - see photo above.

GBBCC thanks all those you kindly donated gifts for the “door prizes” - everyone came away with a prize. 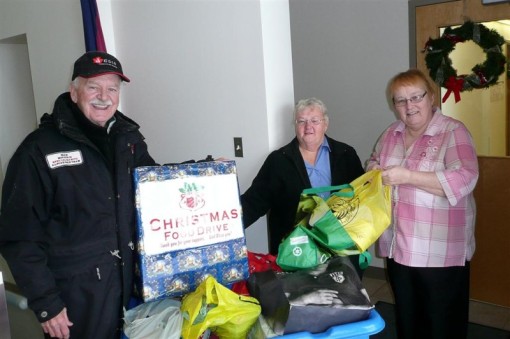 Nov. 8th 2010 - At November's Monthly Meeting, some 30 GBBCC members gathered at Kelsey's and recalled many interesting and some amusing stories about their British vehicles.

Despite the rain and the poor weather forecast, 16 brave people showed up.  This included two MGBs both with hard tops (Harry de Ruiter & Fred Terry).    As usual, Bill Rogers did a great job in organizing the groups to work on the different sections of our highway.  Fred Terry won the prize for finding a cell phone and Lynn Mills found a flash unit and a screwdriver.  No prizes were awarded for those who found "road kill".