Bill Rogers organized the event with the help of the Executive and Brian Wootton was our wonderful master of ceremonies.  Many thanks to Brian Cullingford who provided two very good door prizes.  On the TV monitor, there was a continous slide show of some 499 photos of various GBBCC events held throughout our 2015 year.

Club members made a large donatation to the local Salvation Army Food Drive including $175 cash.

It was an very enjoyable evening and a great finale to a very good year for the club.

Only a few photos from this run

37 members and one guest attended our Fall Colours Tour on Tuesday.  There was a great collection of 19 British cars who gathered at the Ravenna General Store to sample the wonderful Butter Tarts.  Graeme led us on an enjoyable drive to Hanover using quiet backroads with one stop to stretch our legs.  We had a good tour of Maclean's Ales by Charles MacLean (founder of the brewery) followed by some samples.  We then adjourned to the Queen's Bush pub for a late lunch.  Everyone drove back on their own route.  Many thanks to Mark Hord for the photos.

14 Members gathered at Sunnidale Community Centre for the short drive to the Edenvale Airport, and several other members joined us later at the show.  Despite some drizzle and overcast there were many classic cars and aircraft of all descriptions.

We had a great time socialising and chatting with visitors to the show as well as touring the various exhibits. 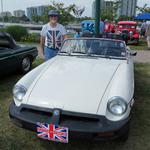 Tom Schutte arranged a great trip for eight GBBCC couples to Stratford where the group had a lovely lunch followed by a super performance of "Carousel" at the Avon Theatre.

Mike Arkless led a group of sixteen cars (32 members) from the Thornbury harbour through Beaver Valley, ending at the Walter’s Falls Inn where we had a great buffet dinner.   The evening was capped off with a gift of British goodies (mostly biscuits and candies) to everyone.  It was a lovely social evening and everyone thoroughly enjoyed themselves.  Many thanks Mike and Gillian.

Bud McCannell of GBBCC led a wonderful convoy, with a total of 21 cars to visit Wings and Wheels at the Owen Sound Airport.  Started at Tim Hortons in Collingwood at 09:30am and off to downtown Thornbury to pick up 4 more cars (on time again).  Then to Bayview Park for a pit stop and organize our entrance to Billy Bishop airport.

"Entrance was a smooth move and parking was easy, right by the gate for a quick exit.  Lunch was a bit of a scramble as our reservation took up half of the seats in the restaurant, so you can't be 100 % all the time.

All in all, the GBBCC group had a good walkabout, checking out the antique cars, trucks, planes, some even went for airplane rides in a C47 (oops, that's US), DC 3 that's Canadian.  I personally met an old fly buddy David Hatfield, brother of now famous Chris Hatfield (the astronaut).  David Hatfield had flown a WW II Lysander Air craft to Wings and Wheels.  Not there long enough for me to bum a ride.

It was a great day, Hope to do it next year."  Cheers,  Bud McCannell

The event was organised by the Owen Sound Rotary Club for the benefit of a “Send a Kid to Camp” programme.

Many thanks to Bud. 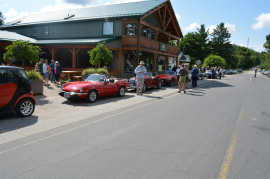 Mike Arkless led a group of eight GBBCC cars from Collingwood to Hockley Valley where they met up with other enthusiasts from the Headwaters British Car Club, the MG Car Club of Toronto and others.  Several people drove their vehicles up the hill and enjoyed listening to the people who told tales of the old days of the Hill Climb.

After the hill climb, a group of GBBCC members stopped at the Terra Nova Public House for a bite of lunch before heading home. 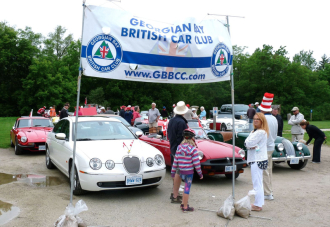 Some 18 GBBCC cars turned up for the parade, although one of our members had to drop out within the first minute with clutch trouble.

Four British cars ventured out for the trip to the S.S. Keewatin in Port McNicoll.  This was great visit and our hosts were super.  Please see their website for more photos:

Many thanks to Bob Muir for leading this enjoyable trip. 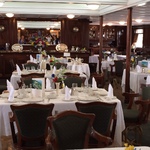 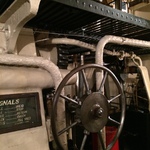 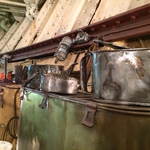 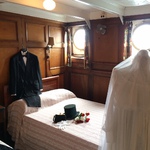 The ferry journeys went well and the Chi-Cheemaun caption (“Travel in Good Spirits”) was quite appropriate after socials held the evenings before, when we sampled some Scottish liquids.  The voyage back to Tobermory was very foggy (not caused by the night before).

A good time was had by everyone with super picnics overlooking wonderful scenery, good accommodation and great social times.  The weather was very kind to us and the rain held off on our last day until we arrived back home.  Well done and thank you Brian and Laurie. 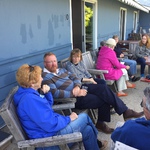 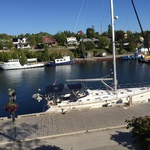 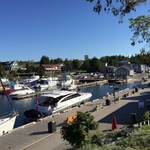 Skillfully made and then kindly donated to GBBCC by Doug Gullett, the plaque was purchased by Graeme Wallace, who donated it to the MG Car Club of Toronto for MG2015.

Jim Schulte (Harleysville, PA) of the Philadelphia MG Club successfully bid for the MG plaque at a silent auction during the MG2015. 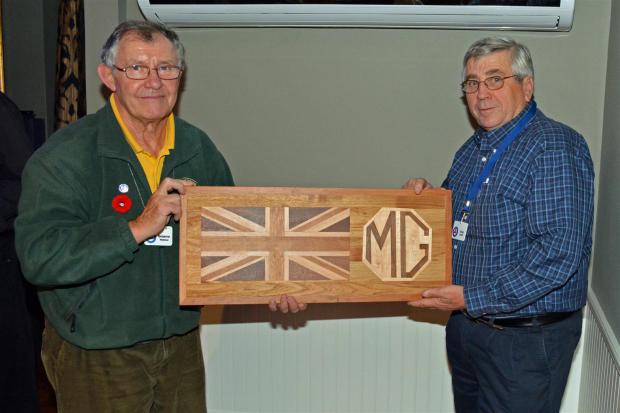 GBBCC's Signature Event 2015 "Brits in the Village" was held on Saturday May 30th at the Blue Mountain Village.  Despite the poor weather forecast, it was a great success with forty seven British vehicles on show.  See photos below:

Thanks to Bill Rogers, Lorraine Leslie (Publisher) featured an article about our car club in the latest summer issue of the free publication Women with VISION.

Pick up a free copy of this publication and turn to page 75.   Although she credits the club for forming in 2000 (rather than 2006), it is a very good article with some great photos by Bill.

Ralph Kertcher arranged three excellent Western cruises, all ending up at the Rocklyn Inn, circa 1891 south of Meaford.  The cruises started at three different locations; Wasaga Beach, Owen Sound and Thornbury led by Eric Taylor, Ron McCann and Ralph.  A total of 36 GBBCC members participated in these cruises and at the end of the drive, everyone assembled at the Rocklyn Inn about 7 pm.

Everyone enjoyed a social gathering in the lounge before entering the dining rooms for dinner, which was prepared by the ladies and one gentleman from the Rocklyn Inn.  Our host, Diana Hammond welcomed us and she randomly selected tables to serve themselves from the wonderful buffet.   It was a very good meal and everyone enjoyed themselves before driving home.  One member had a problem on their way home when a heater hose leaked and caused radiator fluid to spray on the hot manifold.  After switching the heater off, they managed to drive home safely.

Many thanks to Bill Rogers and Graeme Wallace for the photos.

The weather was outstanding for the Spring cleanup of our section of County Road #2 and some 19 GBBCC members helped.  The best quote of the day was “We could not find any neat stuff – all we could find was garbage!”

Many thanks to all members for your help and support and special thanks to Bill and Sharon for organizing this event.  In all of the years that we have been doing this community service, Sunday displayed the best weather we have ever endured.  Our next cleanup will be on Sunday October 4th 2015.

Many thanks to Bill Rogers for most of the photos.

Our first Eastern cruise of the 2015 season led us to Cullingford Motors in Barrie.  Brian Cullingford and his mechanic Phil had two members put their cars up on the hoists for a full inspection and analysis.  All participants were invited to ask technical questions before and during the visit.  Brian gave a practical demonstration and lecture on the operation of SU carburetors.

This visit was very educational and helpful.  Most of the 21 GBBCC attendees stayed for dinner in a nearby restaurant.  We all thank Brian and Phil for a great time at Cullingford Motors.