This section of the website will contain details, including some ﻿maps, of cruise routes that GBBCC has taken in the past few years so that our members may use them for planning future cruises for their own enjoyment or to make it easy for you to pick one and lead a cruise.  They will identify who was the previous leader so that questions may be answered if the route directions are not clear.

It is recommended that these routes be driven prior to leading a cruise to ensure roads are in good condition and are not under construction.﻿

DISCLAIMER - GBBCC makes no representations or warranties about the accuracy, reliability, roadworthiness, or completeness of any routes identified on this website. The content of these routes is provided on an “AS IS” basis only and any use of them is entirely at your own risk.

Collingwood to Terra Nova Public House.  Unfortunately, the Pub is now closed for business and it is now a B&B.  Very scenic drive with lovely views. 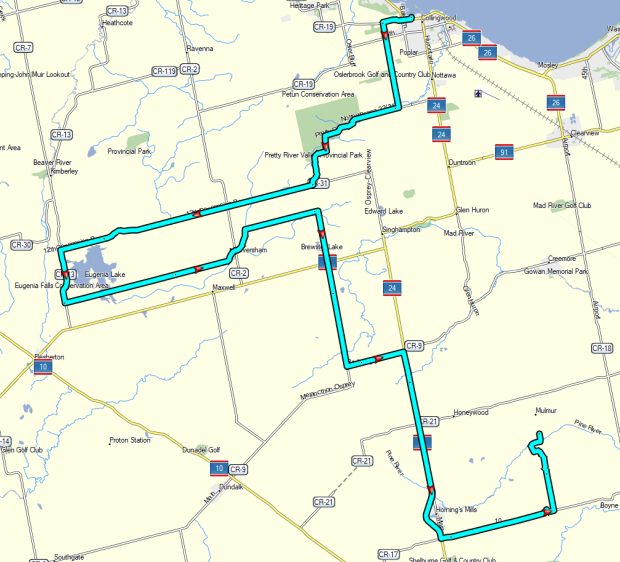 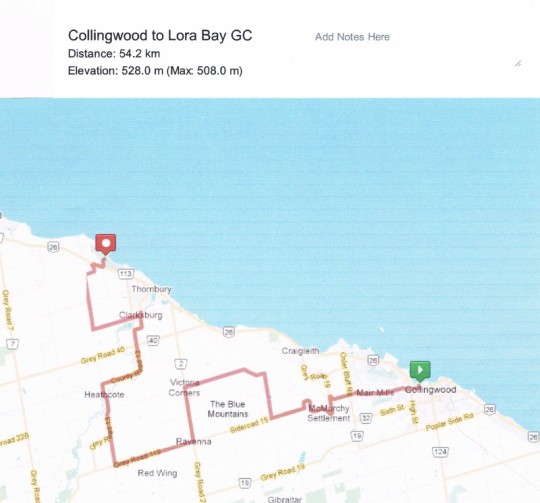 This cruise is a slight variation of Brian Wootton's cruise to the Honey House in Clarksburg on August 16,2012. It follows Brian's route from Collingwood and Blue Mountain over the top of the escarpment with some expansive views of Georgian Bay and the Beaver Valley. An added stop at the Ravenna general store allows for a fabulous butter tart or a chance to shop for some homemade frozen entrees. It continues on to Clarksburg where a there are some interesting art shops and, of course, the Honey House where you can buy, what else...honey. In this case the cruise climbs the west side of the Beaver Valley and follows the overlooking town line to Hwy 26 and then a short hop to the restaurant at Lora Bay, or the many in Thornbury. Question - Where did Ravenna get its name? 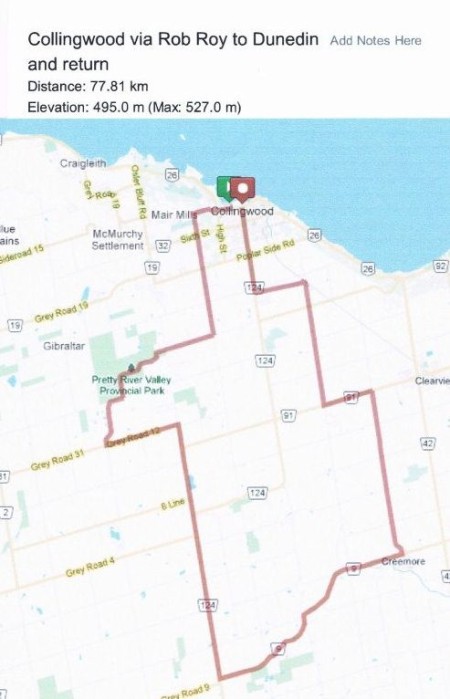 This cruise is an interesting variation of a run to Creemore/Dunedin from Collingwood as it includes a run through the Pretty River Valley to Rob Roy before it heads south to a wonderful view of the hills around Dunedin and the road along the Noisy River to Creemore. Visit the Creemore brewery and the local shops and restaurants. 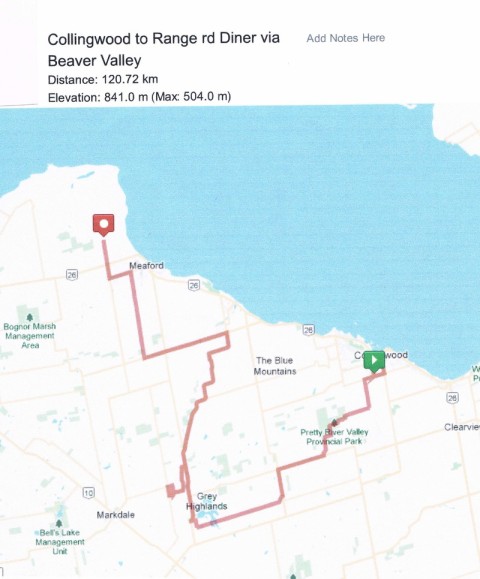 A variation of this cruise was run on September 9, 2012 by the Morgan Club and was led by Eric Taylor. The run includes the popular Pretty River windy uphill run to Rob Roy, the Eugenia Lake Village and Falls stop and a scenic tour of the Beaver Valley. Lunch at the Range Road Diner can be the reward. 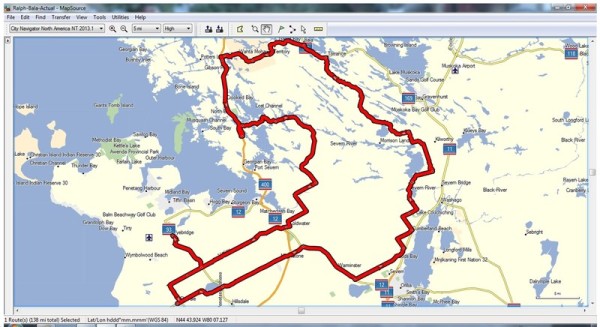 Ralph Kertcher led this wonderful all-day cruise of 138 miles from Elmvale to Bala on Saturday July 14th 2012. It included a great 20 miles section of twisty and windy road which really appealed to our members, especially those true sports car enthusiasts. We had lunch in Bala before visiting the Big Chute Marine Railway. We ended the day with an early supper at Mad Michael’s rustic restaurant. 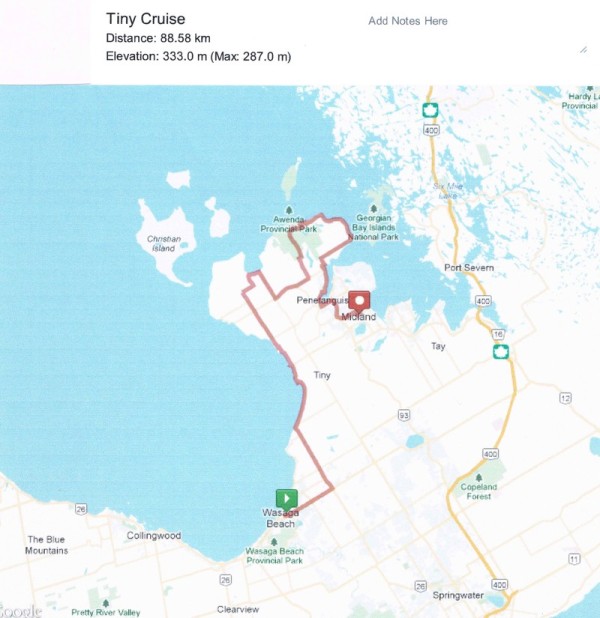 This cruise by Ralph Kertcher, originating at the east end of Wasaga Beach, initially follows the twisty Tiny Beaches Road along the eastern shore of Georgian Bay amongst the cottages of Blue Water Beach and Balm Beach. It continues north towards Thunder Beach and then south and east to the entrance of Awenda Provincial Park where the heavily forested park provides a canopy over the winding road to Kettle Beach. Champlain road continues past cottages and homes to the scenic Penetanguishene Bay.

Visit Penetanguishene and Discovery Harbour or take a cruise of the 30,000 Islands, or continue on to Midland for lunch and/or a visit to Ste Marie among the Hurons . This route was originally used in early June 2011 to visit member Tom Haubert's shop and his extensive collection of Austin Healeys.

Where did Tiny Township get its name?    The township was named in 1822 after a pet dog of Lady Sarah Maitland (1792–1873), wife of Sir Peregrine Maitland, Lieutenant Governor of Upper Canada. Two other adjoining townships were also named for her pet dogs, Tay and Flos (now Springwater Township). 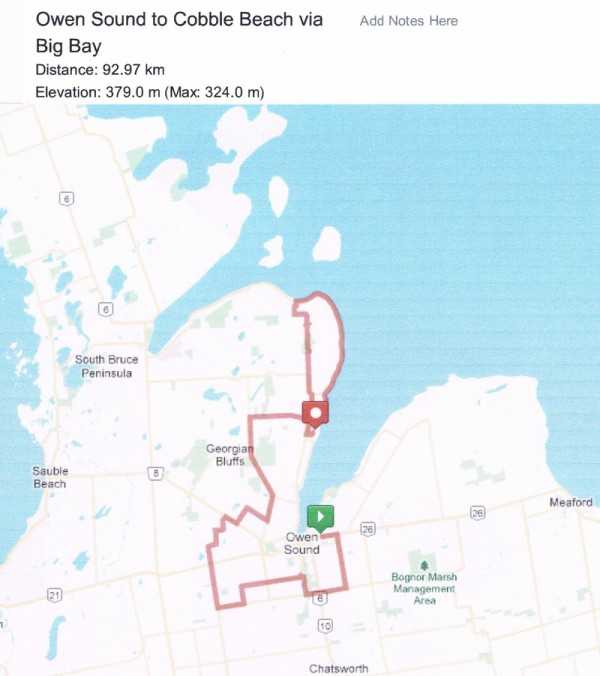 This terrific cruise was planned by Ron McCann and he led the MG Car Club of Toronto and some of our members on a wonderful day in October 2011. The idea was to showcase the beautiful countryside around Owen Sound and expose some spectacular vistas of Owen Sound Bay and Colpoys Bay to the cruise. It included a visit to Inglis Falls and the Big Bay general store which serves fabulous ice cream!!

The cruise ended at Cobble Beach Golf Club for a fine lunch. It was very appropritae that the ceiling was in the shape of an Octagon.  They have Creemore on tap!

DISCLAIMER - GBBCC makes no representations or warranties about the accuracy, reliability, roadworthiness, or completeness of any routes identified on this website. The content of these routes is provided on an “AS IS” basis only and any use of them is entirely at your own risk.