94 members assembled at the Blue Mountain Golf and Country Club for the GBBCC Annual Christmas Gala.  There was a social gathering before everyone sat down for a lovely Christmas dinner.  Burger Bob and his staff did very well and the club presented Burger  Bob with a photo of his participation in the "Walk a Mile in Her Shoes" event.

Many thanks to Brian Wootton for organizing this great event and thanks to Wayne Buttery for his lovely music.  The Food Drive for the Salvation Army was the largest collection from GBBCC and our donations were gratefully received.  Everyone seemed to enjoy the evening and it was a great success.

Wishing everyone in GBBCC a very Merry Christmas and a Happy New Year for 2015.

Never let it be said that a few clouds and 3º C will keep a GBBCC member from a cruise through our scenic surroundings. We had 12 British cars and 22 attendees.  The day started with an Ear Muffs contest judged by a discerning young lady named Hannah who happens to be the grand-daughter of Don Godfrey.  Hannah ordained that we could abandon the normal protocol concerning Conflicts of Interest.  She awarded her ‘Poppa’ first Prize using creativity as her criterion.

Hannah’s generous spirit led her to the conclusion that there should be runners-up just in case Poppa Godfrey declined or was deemed unfit to hold the prize later in the year. She therefore gave the First Runner-up title to Bob Mills and the Second Runner-up title to Peter Gifford.  All three gentlemen were thrilled to receive these new distinctions.  The award ceremony took place at the Lora Bay Golf Club which offered soup and a selection of sandwiches. Some of us also enjoyed the wonderful desserts.

We were all pleased with the cruise which was led by Paul Green using a route obtained from our GBBCC website, updated as some road names had changed over the years.  Susan Hall reminded us that GBBCC has a rule that the winner of the Ear Muff Run prize is the leader of next year’s run. Only one person did not recall this as a club rule.  See you next year!

Bill and Sharon organized another great Fall Cleanup of the section of Grey Road 2 that GBBCC has adopted.

Take a few beams of sun, throw in the odd rain drop, add a bit more sunshine, sprinkle a heap of sleet, roll in a bunch of dark clouds, add some more sun, throw in a bit of blue sky, take sight of a magnificent rainbow – repeat.  Later, add a warm fire, a few cold beers, hot coffee and tea and voila…………. the perfect recipe for another day in the GBBCC Adopt-A-Highway history book.

18 brave GBBBCC members gathered to clean the highway and as one of them commented later: “Bill and Sharon, it isn't necessarily easy making a road garbage pick-up day a fun event BUT you, Sharon and a really great group of members pulled it off again. Thanks again for your work organizing everything”.

Many thanks to Mike and Laura Lucas for hosting the social gathering at their home, after the cleanup.

Bill Rogers led a group of nine GBBCC members displaying their British vehicles on Hurontario Street, Collingwood during the “Walk A Mile” charity event for My Friends House.  The "Walk a Mile in Her Shoes" Georgian Triangle event was a fantastic success.  Over 100 men donned the red high heels to Walk a Mile and they raised over $37,000 for the local community.

Paul & Gwyneth Green led some 28 GBBCC members on a lovely cruise to the Terra Nova Public House where we had a great lunch.  The Fall colours were still magnificent, as you can see in a few photos below, and after a very enjoyable lunch several members followed Paul back to Collingwood.

We started out with clouds and some tops up in Collingwood with 3 cars but as the day progressed the weather turned sunny.  We met 3 more cars at Crossland Road & Hwy. 26.  From there we took back roads up to Balm Beach and on into Penetanguishene and Discovery Harbour.  The group was joined with Rick and Judy McGee’s friends, the Johnson’s 1936 Plymouth Touring Sedan and the Price’s 1964 Ford Farmland.  Several more members with their cars met us at Captain Robert’s Table for a great lunch and the performance at King’s Wharf Theatre.  The chef is a MINI driver and took time out to view our cars.

Rick McGee was “over the moon” when he was serenaded by Donavan during the performance (you had to be there!).  By the end of the show we were all clapping and singing along with Twist & Shout.

Congratulations to all on the BBQ committee for arranging and pulling off this wonderful event!  28 British cars attended with over 60 members, many dressed in British regalia.  The weather was great and everyone had fun.  Many thanks to Joe Macdonald for cooking all the food and also thanks to all who brought great salads and desserts.  Submit your recipes to Webmaster@gbbcc.com and we will have a special section for member’s recipes.  The competitive streak of our members was shown in the Corn Hole competition.  The winners were Jill Carey and Rick McGee, with Ralph Kertcher and Gerry Murphy coming in second.  Many thanks to Bud McCannell for donating the lovely wine uncorking and decanting set and to Blue Mountain Golf and Country Club for the two golf passes.  Three cheers to everyone for making this such a great event.

Article in The Globe and Mail on September 5, 2014

Nestor turned 42 this week, but the great Canadian doubles player is not thinking about retirement. He's got his eyes on the next Olympic Games.

The players' lounge at the Citi Open tennis tournament in the American capital is glass-walled and offers an array of pastimes: day beds, desktop computers, Jenga, and in one corner, cornhole.

The beanbag-tossing game, a staple of professional tennis, helps fill tedious hours between practices, the gym and matches. Competitors stand eight metres from a rectangular box and loft beanbags into a grapefruit-sized target.

Nenad Zimonjic, a 38-year-old from Belgrade, tosses bag after bag and each one fails to score. "Ziggy!" announces Daniel Nestor, the 41-year-old Canadian who is Zimonjic's doubles partner.  "You may be the worst cornhole player of all-time!"

Our leader, George Christie led us on a cruise to Kimberley where we had a large, very good buffet provided by The Village Inn. We then had a short drive to Roy’s Rads where we were overwhelmed by Roy’s collection of cars and auto related items. We also saw his collections of other items, including an assortment of 50's and 60's paraphernalia

Ron and Rosemary McCann gave a warm welcome to the occupants of 21 British cars when they arrived to begin their Western cruise.  All participants praised the route.  The fun continued at Else’s Diner in Owen Sound.  This 50’s restaurant was the perfect choice.  The decor brought a smile to our faces and evoked memories as well.

We all say thank you to Ron and Rosemary 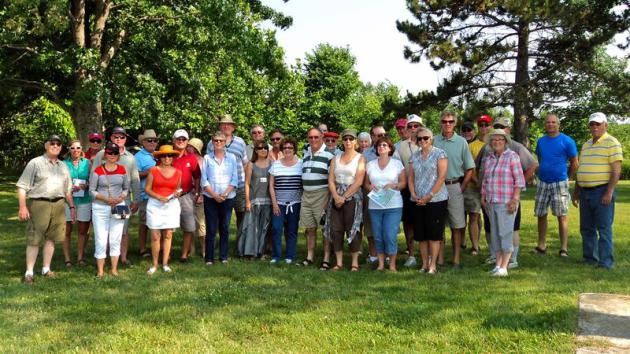 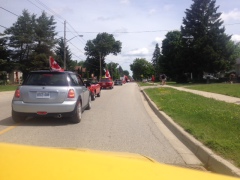 In spite of the cruise date taking place during the busy times working up to Canada Day celebrations, a number of GBBCC members attended our first ‘static’ cruise at Bill Rogers garage. The weather was perfect for hanging out, and those in attendance brushed up on their knowledge of the famous sports cars from Blackpool. Four very different TVRs were on display, and the crowd had a number of interesting questions answered.   At the end of the evening, a draw for a brand new TVR was held, and the prize, which will be presented at our next general meeting, was won by Doug Teddiman. Congratulations Doug. 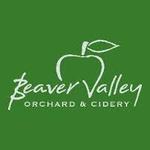 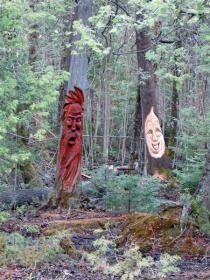 Tom Hall led us on a very good drive, which took us by a very interesting roadside attraction of many carved trees near the Mt St Louis Moonstone area.

Supper at Horseshoe Resort was good and it was a very enjoyable evening - many thanks Tom.

This endorses the revival of our East / West Cruises. 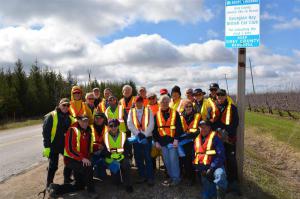 The weather was cool and very windy, but 22 hearty souls attended and the cleanup was completed in good time.  There were not as many imaginative stories regarding treasures found, however Gwyneth Green won first prize (a brand new TVR) for her submission of a winch ratchet box, which Bill may be able to use on one of his cars.  Other winners were Olav Vanderzon and Wayne Dziedzic.

Mark Hard explained the Rogers TV Local Channel Classic Car project, which will feature some of our GBBCC members and their vehicles.  Following our regular items on the agenda, Graeme gave an overview of the GBBCC website.  A series of short interesting videos were then shown. 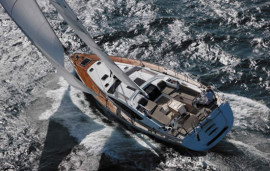 Brian Wootton showed us a wonderful presentation with photos and videos of his voyage across the Atlantic ocean in November 2013, delivering a 57 foot sailboat from the Canary islands to the British Virgin Islands. What a great voyage.

Thank you very much Brian, for sharing some of your tales with us.