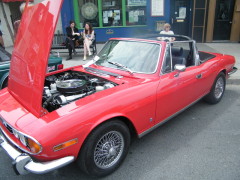 This is a Signal Red 73 Triumph Stag Mk2.  Car has been gone over from front to back and is in better condition now than when it left the Triumph Factory bound for the US. Engine is the original TR V8 and all the built in problems have been overcome, with Holly carb installed, electronic ignition, heater unit replaced with the British version which is cable operated, not vacuum. The BW35 auto transmission was rebuilt X3 another story, but ran well afterwards, but drove Tony Fox's Stag with the ZF22PH Jaguar auto transmission which is much smoother, less RPMs and better MPG, my Stag ZF kit is being delivered tomorrow and installed at the beginning of January. Original radio was rebuilt and now is both FM and stereo, but looks untouched, new seat covers and interior carpets made by the same company in the UK who supplied interiors when being manufactured.

The worlds worse electrician got at the car sometime in its life, and fortunately when I had her repainted, I stripped her and discovered all the cut, twist together and tape joints, plus all the bare bullets "floating around" uncovered, all are now fixed, I hope.  Car body is amazing with no rust as I thought until I lifted the carpets to replace them and discovered two three inch wide areas not covered with sound deadener, designed that way, that were at the lowest part of the car. The carpets had obviously got wet when "stored" for many years and rotted out those two strips.  All has now been fixed and strength and original appearance is back 100%.

The Triumph Wedge Owners Association is a world-wide club for both TR7s and TR8s. Lots of good stuff for "Wedgheads".

Two Triumphs of the Heart (Globe and Mail)

The late Rick Crawford submitted this documented procedure that he wrote while making a wind blocker for his TR6.  The attachment is unique to a TR6 but with some modifications it could be adapted to any LBC. 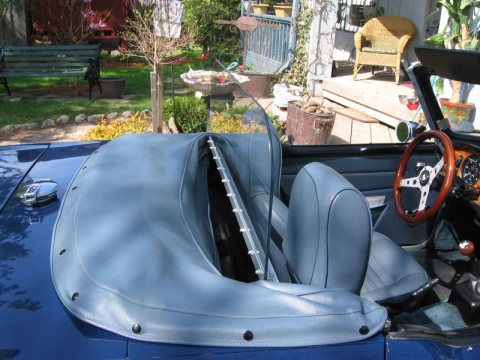 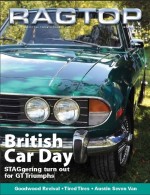 Many thanks for the following articles, obtained by George Christie from the Toronto Triumph Club’s Ragtop magazine – Winter 2010, courtesy of David Fidler, Ragtop Editor.

The “Wax On Wax Off” and “Tired Tires” articles were authored by Glen Donaldson and “Trim Your Carbs” by Ken Dolhonde.