Comments from seller and buyer regarding the sale of TVR S2, as told by the authors; Bill Rogers & David Sheldahl.

It all started last year when my wife reminded me that I was currently the proud owner of four TVRs. She then went on to remind me that some time in the not too distant future, we must think about moving from our large home to smaller premises, and that it would be extremely difficult for us to find ‘smaller premises’ with six cars (2 daily drivers and 4 TVRs). She then went on to say ‘get rid of some of your cars’.

Well, after this conversation, I immediately went out to my garage to find some sort of consolation, and had a long talk with the ‘Tivers’. I then made the decision to put out some ‘feelers’ to see if there was any interest in my 2500M, the 5000M and the S2. The 2500M sold quite quickly (I could have sold 3 more) in the summer of 2014. For the rest of the driving season I had a bunch of ‘tire kickers’ but received no firm offers for the other two.

In the fall of 2014, I decided to take the 5000M off of the market, and to concentrate on selling the S2. As the S2 was built Blackpool in May, 1989, it became 25 years old which meant that it was eligible for import into the USA. I received a number of enquiries from prospects in the US, but nothing solid.

Then in May came our visit to Carlisle. As we have done for a number of years, the Canadian contingent of ‘usual suspects’ travelled in convoy to the ‘OUT OF THE WOODWORK’, or WW15.  I was driving my Late Model Griffith. At the show on Saturday, and with the help of Gilles Deschenes, I met a fine gentleman named David Sheldahl who was very interested in Gilles’ S2. Gilles stated that his was not for sale, but my S2 was, and that is how I was introduced to David. David lives in Washington State, but was visiting his son in Pennsylvania near Carlisle.

To make a long story short, David ended up purchasing the car, sight unseen subject to his personal inspection. A deposit was made, and delivery was to take place on June 12, 2015. At this stage throughout the discussions and negotiations, a tremendous amount of trust and respect was developed between David and me.

June 12th turned out to be a very busy day. The plan was to pick up David at Toronto airport, and after his inspection and acceptance of the car, drive him to the US border at Queenston near Niagara Falls. David flew from Seattle to Cincinnati on the ‘red eye’, and then flew from Cincinnati to Toronto arriving at 8:20 am. As I live 2 hours north of Toronto Airport, I had to leave my home at 6:00 am. A good friend and member of our local British Car Club, Ross Tyler had agreed to follow me on the excursion from Blue Mountains to Queenston.

I arrived at the airport at about 8:00 am, and after several text exchanges, I picked up David in the S2. In the meantime, Ross was waiting at the Shell station just outside the airport. We met Ross there, and after his inspection, David agreed to purchase the S2. We then proceeded to Queenston where David took final delivery, and he headed to the border crossing.  Ross and I then headed back to Blue Mountains while fighting rush hour traffic in the Toronto area.

I wanted to add a post script to Bill’s article from my perspective – the buyer.  I traveled from my home on an island in the south Puget Sound to my son’s home outside of Gettysburg, PA in mid-May to spend a quality weekend with him and discuss his upcoming marriage in September.  We are both import car guys so we decided to head to the Carlisle Import Car Show that Saturday, May the 16th as an excellent father/son activity.  Never did I plan on purchasing another automobile, certainly not a TVR. After all, this was a car show, not an auction.  As we made our way around the grounds there were hundreds of cars on display with many of their proud owners standing by them.

We came upon the TVR section and were greeted with many examples not normally found in the United States.  I learned that many were from Canada and that every year a great deal of the club members makes the drive to Carlisle to display their cars and enjoy the camaraderie of fellow TVR owners. Quickly I was drawn to a green/tan TVR S2 on display and started a conversation with its owner, Gilles Deschenes.  I have owned many British automobiles; in fact my first car was a 1967 MGB.  From there I had several TR6s, E-Types, an XJ-S, a final run turbo Lotus Esprit and an Aston Martin.  I knew a little about TVRs but more of the ones from the 1970’s that were imported into the states, I had never even seen an S2 before this day. As Gilles was explaining to me about his S2 he mentioned that another friend of his at the show had a blue/magnolia example and that it was for sale. He tracked down that owner, Bill Rogers, and introduced us.  There began my education on the TVR S2.  He further educated me that after 21 years for the EPA and 25 years for the DOT you could get an exemption and import one of these cars into the United States with no restrictions.  With that I was hooked and the rest of the afternoon I learned as much as I could about the TVR and specifically the S model.  Before leaving the show I visited the TVR tent and obtained an old issue of TVR Times along with an application to join the TVR club.

That evening at my son’s home, after feasting on a delicious dinner of Maryland blue crabs we researched everything we could on the model via the internet and even found an episode on “Wheeler Dealers” featuring another blue TVR S2 that they fixed up and sold.  The more I learned the more I wanted to become an owner.  We ended staying up to the wee hours of the morning enjoying this project together.  What better for a father & son bonding experience?  One problem remained though, I lived in the Pacific Northwest of the United States and the car and its owner lived two hours north of Toronto, Canada in Blue Mountain, Ontario.  I have never purchased an automobile without seeing it or driving it; however, that was about to change.  I have bought many cars over the years, in fact I have twelve in my fleet before this came along, and I have always said that it is maybe more important when buying a used car to look at the owner rather than the car.  In this case the owner, Bill Rogers, was a prince of a man always quick to respond to any question about the car and had meticulous records covering his ownership. Before leaving the east coast for my home out west, I scoured Amazon and EBay and made purchases of several books and old copies of magazines covering the car. I also mailed in my application to the TVR club to Terry Telke and he was kind enough to send me some past issues of TVR Times so that I may learn a little more about the club and the marque. Thanks Terry.  Over the next two weeks I was in frequent contact with Bill and a deal was secured. I flew to Toronto where Bill met me.  Then the two of us drove to the US border together with him explaining as much about the car as he could in those two hours.  A couple of miles from the border he bid me fond farewell and I drove my TVR for the first time adding a new marque to the fleet and a new friend from Canada as well.

Despite having all the paperwork in order it still took me four hours to get processed at the border and pay my duty and be on my way.  That is another story for another time.  I drove back roads through New York and Pennsylvania and ended up at my son’s home in Gettysburg late in the evening just as a storm approached.  Spent the night there with him; unfortunately, he got called out to work at 5am and he was unable to drive the car.  I washed the car that morning at his home and then continued the drive to my mother’s home outside of Washington, D.C.   From there I made arrangements for shipping to my island home in Washington State where the car is now and I am enjoying it immensely.

This was a great experience and not only am I the proud owner of a TVR S2, I believe the only one in the United States, but I have made a new friend in fellow petrol head Bill Rogers. 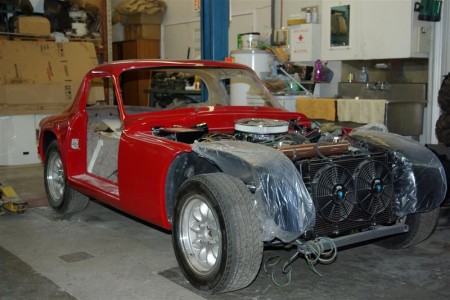 This is a 1976 TVR 2500M which was first owned by Bill Rogers in 2006. At that time, the car had been subjected to a ‘body-off’ restoration but had only been about 20% completed. After selling it later that year, Bill repurchased it in 2011 with the intention of not only completing the restoration, but by changing power train from its original engine to a FORD 5.0 small block V8.

The photos were taken on April 4th showing the body now installed on the completed chassis with new wiring installation under way, and the engine compartment with the V8 neatly tucked into the engine bay.

While the project has faced a number of delays since 2011, it is now moving ‘full speed forward’ and the completion date is now late May or early June 2013. 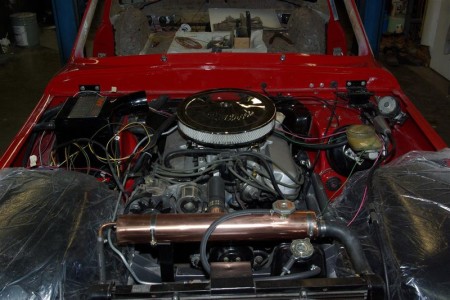 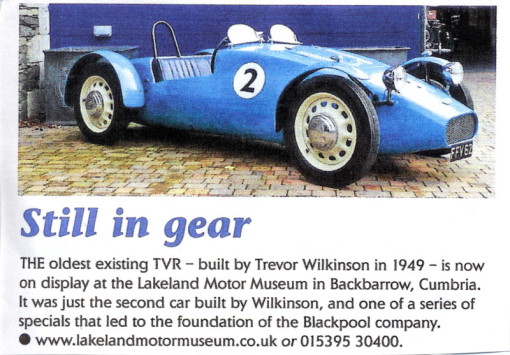 25th Anniversary Performance of "Les Miserables" with Alfie Boe singing "Bring Him Home" - he is the Valjean wearing a white shirt.

In his late teens Alfie Boe took a job as an apprentice mechanic at the local TVR sports car factory in Blackpool.  During the day he was shunted to the corner of the factory and left alone to listen to his beloved classical music. He would, quite often, entertain his workmates by singing his favourite arias and it was on one of those occasions that he was overheard by a customer. The gentleman worked in the music industry and suggested that he should go to the D'Oyly Carte touring company who were auditioning for new members. Out of over 1,000 hopefuls Alfie landed the job.