Wayne Clute received this story from his long-time friend David Bilton.  Wayne met Dave in Collingwood 1964 and they become pals for three reasons.   They both were driving British sports cars back in the 60's, they were both ex-military and they were both single at the time. At present Dave lives near Brighton, Ontario and is still a British car fan. Wayne asked Dave if he would allow this story to be posted on the GBBCC web and Dave agreed. 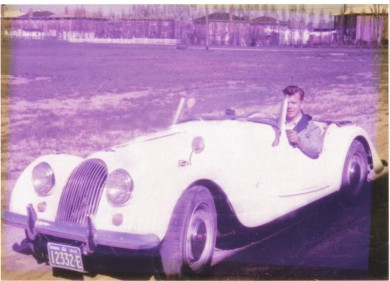 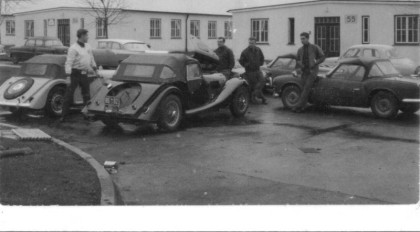 My first British car was ALMOST a 1953 Jaguar XK120 FHC, back in 1960. I say “almost” because it was apparently not to be. I had agreed to purchase it from a friend and take possession on a Saturday morning, so he decided to road-test it on Friday night to ensure that all was well. On a moonlit evening, with all the lights turned off so that attention would not be drawn to a car traveling in excess of 100 mph, the car suddenly lost all of its coolant. With no gauges illuminated, the rapid rise in temperature was not noticed until the engine self-destructed. Needless to say, I did not complete the purchase.

In late 1961, I was dispatched to Europe as I was serving in the Canadian Army at that time (1957 to 1964) so my choice for my first British car was now an E-type Jaguar. I recall that the price at that time would be USD 5000.00 which would have necessitated that I live like a hermit for several years in order to afford it on a soldier’s wages. While still dreaming of some day enjoying ownership of a Jaguar, one day a friend brought into the military camp a 1963 Morgan 4/4 while on a test-drive from a local auto dealer. It had been traded in by a Canadian school teacher and was for sale for CAD 1300.00

The car was baby blue in colour, and fitted with the Ford 109E engine displacing 1340 cc

I hope I am recalling these figures correctly, as it has been over 50 years now. Before long, the performance no longer seemed very spirited, although the handling remained outstanding. I read of an available modification, in the “Motor” magazine, and corresponded with the Morgan factory in Malvern Link to arrange an appointment to have my car modified to match the one featured in the magazine. Peter Morgan wrote back to discourage me from choosing this particular modification which included Weber carburetors if I wished to drive the car on public roads. It seems that this was a full race conversion which resulted in two basic throttle positions – “open” and “closed” and that the car would not be at all tractable for daily use. However, the factory had another modification available which was much more suitable.

I still have the invoice from The Morgan Motor Co. Ltd., Pickersleigh Road, Malvern Link, Worcs. dated 15 May, 1964, totaling 105 pounds to perform the following:

Also included was 10 shillings for “Removing Dent from wing” which I never noticed on the invoice until now. I do not recall suffering any dents until the car was loaded on to a ship for carriage to Canada on September 4/1964.

For this modest outlay, the resulting improvement in performance was remarkable. The zero to 60 time dropped to about 10 seconds, and top speed increased to over 90 mph, with the tachometer redline increasing to 7000 rpm.

I picked up the car from the works on the Friday preceding Whitsun weekend, and went to visit a very nice English family whom I had met while waiting in line for the ferry at Ostend, Belgium on my way from Germany to England. Their home was nearby, in Worcester. My hosts insisted that I spend a few days with them as the road traffic would be extremely congested during the holiday weekend. I enjoyed a family picnic, watched rowing races on the Severn River, and gave my host the fastest trip up the Shelsley Walsh Hillclimb that he had ever experienced.

On my return trip to Germany, I detoured through Holland so that I could attend the Dutch Grand Prix at Zandvoort. During this trip, I met formula one driver Bob Anderson who campaigned his private Brabham with not much chance of a victory, but did manage a third place finish in the Austrian grand Prix in 1964 which earned him the trophy for best private entrant of 1964. Unfortunately, he was killed while testing at Silverstone in 1967. Formula One was very dangerous during the 60’s.

Once back in Germany, I joined the local sports car club, as well as ADAC – sort of like our CAA but with a much prettier badge for the car. I still have a little trophy for “best foreign entrant” in a rally with entries from seven countries. A German friend owned a 1939 BMW type 328 which was somewhat similar in style to the Morgan. I had repainted my car in a stark white finish, and the old BMW was also white. He was running a Skoda engine while he searched for a period correct Bristol engine. I presume he was from a wealthy family – I recall that they had a garage beneath their home, and it had a turntable in it so that an extra vehicle could be stored there. We had marvellous times driving around the German countryside in our two white sports cars, turning heads everywhere we went.

When my three year term in Germany came to an end, I had decided to leave the armed forces and bring my Morgan back to Canada. It was shipped from Bremen on the SS Roland Russ on September 4/1964 and arrived in Montreal on September 18 and was forwarded to Trenton where I landed a bit later in a converted Yukon. The car had suffered considerably during its voyage. While removing the battery for sea shipping, someone had damaged the hold-down rod, driven it through a hydraulic brake line, and then left the battery on its side. To add insult to injury, a roof bow was bent, my portable radio bracket and all my tools were stolen, and one fender had a sizeable dent. Except for a new battery, no suitable parts were available in Trenton at that time, so I had a mechanic just patch the brake line with a blob of weld, and I then drove to Collingwood Ontario without once using the brakes. One amusing occurrence was that while under the car with the welding torch, the mechanic almost set the car afire, not realizing that the floor boards and other parts were of wood.

Winter came all too soon, and the Morgan was stored in a garage in Collingwood for the winter, except that on exceptionally fine sunny days I would call my local insurance agent and advise him that the car was going to be in use for the day. A day which I can now look back on and chuckle about, was when I took the car to the Blue Mountain ski hills with the top down and went into the cafe to meet with friends for a while. When I came out an hour later, it was to see two young boys running from my car. My departure was delayed quite a bit as I had to scoop a couple of cubic yards of snow from the car’s interior – they had filled it to the gunwales.

It was while driving the Morgan that I met Noreen, who was to become my wife in 1966. I had to sell the car when we got married, but she patiently stuck with me through thick and thin until we could once again afford a convertible sports car. I had actually brought back an E-type Jaguar from Europe, as I had promised myself, but alas, it was a Dinky toy about three inches long. The fellow who had introduced me to the Morgan had remembered my pledge, and presented me with the little Jag on the day before I left Germany.

Forty-Nine years later, in August of 2013, I finally got a real Jaguar: the 1998 XK8 convertible which prompted me to join the Boot n Bonnet British Car Club. 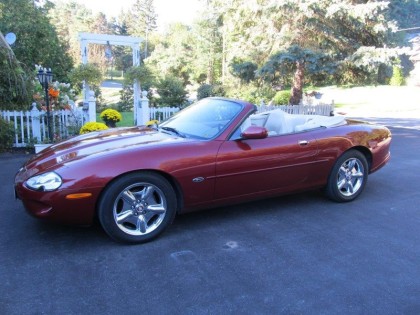