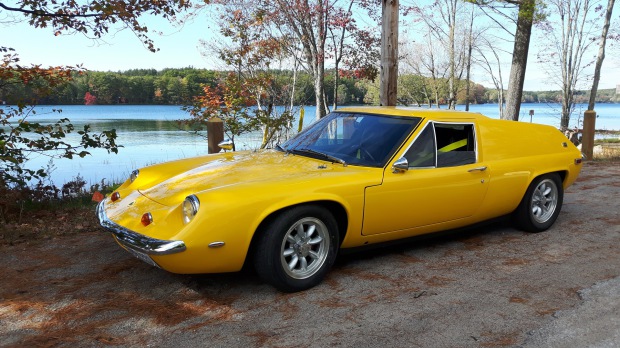 It was the spring of 1970  while I was studying engineering at Ryerson and  my high school sweetheart (since grade 10)  was completing teachers college in Peterborough, when she decided that June 6th of that year would be a good time to get married. I saw a tremendous opportunity to make our wedding special and memorable, and what better way than to rent an exotic car for the honeymoon.  Being short of funds during the school year, entertainment was often limited to ogling the exotic beauties in the show room of British United Automobiles and the bright yellow Lotus Europa S2 was one that had really got my attention. Knowing me by name by then, the sales staff didn't hesitate when I asked if they would rent the car to me for my honeymoon. Getting married now took on a whole new dimension, as my roommate and volunteer photographer, Dave Lawrence, counted down the days until we got "THE CAR"!

We spent our honeymoon night in Belleville and when Janet woke up alone on her first morning as a married woman, she looked out the window to see me showing off the car to a gathering of motel guests studying our car. I may have forgotten to mention that it was a rental.

From there, we started our tour of northern Ontario where we stayed in small motels along the way.  A crowd seemed to gather around the Lotus everywhere we stopped or stayed and made us feel like celebrities as we fielded questions from curious passers-by and car nuts alike. It made the trip feel special and one we would never forget.

Needless to say, Janet and I loved the Lotus experience, so much so that two years later, we bought a 1969 S1.  Immediately after we bought the car in 1972, we wanted a repeat of that experience and planned to make it happen during a 2 week summer vacation. Two weeks in paid accommodations was too pricey so we decided that we would make it a camping trip along the same route as before but in reverse direction. We couldn't get two weeks’ worth of camping gear into the Lotus unless one of us stayed home, so we went to Canadian Tire and bought the smallest roof rack that they had and luckily it was small enough to fit the tiny roof on the Lotus.

Besides the usual camping gear we took an inflatable dinghy and fishing rods to catch our supper whenever we could. It was a great trip with a couple notable exceptions. Following highway 11 east from Longlac we noticed a roadside produce stand and stopped to browse. We left with a quart basket of beautiful red sweet cherries that we placed on the center console as there was nowhere else to put anything. Being so close at hand, and feeling a bit peckish we popped these delicious orbs one after another, spitting the pits out the window, until we were quite stuffed. It's a long way from Longlac to Hearst with almost nothing in between. No towns, villages or gas stations where one might find a rest room. We became painfully aware of this fact as we became painfully aware that fresh fruit, like cherries have a laxative effect. As we grew more and more anxious to find a refuge, we started driving faster and faster to avoid an accident. I know that sounds counterintuitive but it seemed like the safest bet at the time. After a very long while we arrived in Hearst and rocketed into the first service station we came to.

We came out to find the big station wagon that we had passed a while back, full of camping gear, kids, dogs and parents pulled up behind the car. We casually sauntered over expecting star treatment as we claimed possession of the Lotus but instead were surprised to see Dad holding a big green garbage bag and asking if we had lost anything. In deed we had. Our two pillows had been in the bag and tied onto the roof rack. As a pilot, I should have remembered as everyone knows that aerodynamic drag increases with the square of velocity. Our high speed dash and squared drag had torn the pillow bag from the roof rack, thus decreasing our drag and increasing our groundspeed which may have been a blessing given the closeness of the timing on our arrival. This close call was followed a couple days later by a flat tire in the middle of nowhere. Changing a tire on a tiny car like this is easy, but only after you've unloaded all the camping gear to get at the spare and jack which is always in the lowest part of the car. Given that it was a Lotus, we were lucky to even have a spare or jack.

Another couple days later while making our way along the highway I began to notice some unwelcome noise coming from the back end of the car where the mid-engine and transmission reside. As the miles rolled on, the noise became more pronounced and by the time we got to Timmins, it was telling me that we had gone as far as we were going to get. I found the left inboard U-joint was completely shot and barely hanging together.

I didn't have any tools or parts with me so I called the Timmons Chamber of Commerce and asked if there was a Lotus dealer in town. When the receptionist asked me if a Lotus was a snowmobile I knew we were in trouble. It was a Friday afternoon ahead of a long weekend and I was getting desperate as we couldn't afford a tow truck back to Toronto. We limped into the local Ford dealer and I threw myself on their mercy. They took pity on us and put the car up on the hoist for a look see. The mechanic took a look at the shot U-joint and remarked that it looked a lot like one he had seen recently on an old MG. He took some measurements and called the local parts store where, miracle of miracles, they had a part with the same dimensions. Two hours later it was installed and we were on our way.

This was day 11 of our two week trip and since it had rained for 8 of the 11 days we decided to call it quits. We left Timmons for my Dad's place near Oshawa where we were warmly greeted by my Dad and brother. At the time of our arrival, they were digging a deep trench for the weeping tile of an expanded sewage system, so my arrival was well timed from their perspective.  There were only two shovels, so my Dad graciously gave up his so as not to deprive me of the joys of ditch digging as he had at one time predicted, would be my calling . And so that's how our vacation ended. Janet was lounging poolside with my Mom and sister while I spent three days digging a ditch with my two best friends. That winter we learned the hard way that the Europa was not a winter car so we replaced it with a brand new Austin Mini from British United, naturally.

Over the many years since, Janet and I have completed more than a dozen ground up restorations of cool cars like Jaguars (2), BMWs (2), Corvettes (2), Sunbeam Alpines (2), Mercedes Benz, Range Rover, and Cadillac, as well as a handful of daily drivers.

In 2008, I was forced to retire from my flying career due to kidney failure, which would ultimately require a kidney transplant. Janet volunteered and qualified to be my donor.  By August 2013, the time had come. On September 25th, I received the new kidney from my soul mate, and immediately felt my energy returning, all be it slowly. In June of 2016, we felt we were ready to do one last restoration, and to find out if we could still manage it.

We happened upon a car restoration show on TV where Jay Leno was sponsoring the restoration of a Lotus Europa. (The two part show can be seen on “Overhaulin”, on YouTube). We looked at each other and we knew we had made our decision. Our online search was global and we considered all candidates except basket cases and completely restored cars, but found nothing that fit our needs. One week later, a car popped up on Autotrader in Victoria B.C. that matched our criteria. Coincidentally, a 1970 S2, just like our honeymoon car, (there is a chance this is the same car as records show that it was sold in Toronto by British United). A phone conversation with the owner on a Sunday morning assured us that this was a prime candidate.

Randy Mains, a flying colleague living in Victoria took a number of digital photos and sent them to me for a preliminary assessment. We boarded a flight to Victoria on Wednesday of that week, and sealed the deal on arrival.

While the car spent 8 days on the train to Toronto, we ticked off an item on Janet's bucket list by taking a last minute cruise to Alaska, and to keep me occupied until I could get "THE CAR".

Designed by Colin Chapman, whose expertise in race car design was proven by a number of Formula 1 Drivers Championships and multiple Car Constructor titles, his motto was: “If the car doesn't fall apart crossing the finish line, it was too heavy.”  This is borne out in Lotus owners’ belief that LOTUS stands for ‘Lots of Trouble, Usually Serious.’

We trailered the car home and spent a week ensuring the car was safe to drive and reasonably reliable, as we wanted to get some driving in before winter set in. At the end of November, we delivered the engine to Michel Guegan of Alpine-America in Montreal, the only shop in North America that specializes in the Renault Gordini engine in our Europa. Over the winter months, the structural fiberglass repairs were done by Larry O'Rourke of O'Rourke boat works in Penetanguishene, followed by final prep and paint by Gary and Dave of Body Line Collision in Midland.  Chassis modifications like redesigning and fabricating new rear hubs and bearings (notoriously unreliable) and much welding and fabrication were done by Peter Lindemann of Traditional Turn & Weld.  Pete's motto is "nothing is impossible" and he certainly demonstrated that with his machining skills and engineering genius. I was kept busy over the  winter with many jobs like reproducing the crumbling teak dash, building a new wiring harness, overhauling the brake cylinders and calipers, making templates for, and cutting new carpeting, hunting for parts and coordinating the efforts of the team.  We trailered the car to Montreal in July of 2017 where we removed and overhauled the transaxle, then mated it to the freshly rebuilt engine and installed the pair for our first drive in 8 months.

Once back home, new upholstery was fabricated and installed by my brother Steve of Superior Textiles in Midland.

Since then we have participated in the "Fall Run" with the Lotus Club of Canada and show and shines with our own Georgian Bay British Car Club in Collingwood.  Driving this car is as close as you can get to the experience of driving a genuine race car, as described in the May 1970 issue of Road &Track Magazine (recommend reading).

The car is in winter storage now and we're already twitching to have it back on the road to enjoy the spring blossoms in the Niagara region and the winding back roads in the Muskoka area over the summer and into the fall.

This was a labour of, love, and we loved every minute of the process.  This coming June 6th 2018, our wedding anniversary, we will be continuing our 48 year honeymoon with a road trip in our honeymoon car, just as we did all those years ago.