On Thursday morning, 12 vehicles, including 3 MGBs, 3 Jaguar XKs, and an Austin Healey met up in Collingwood for the Ear Muff run.  Having very atypical November weather, +18C, blue skies, and virtually no wind, ear muffs were not necessary!  Five members had tops down.

Led by Kate and Doug Simpson, we went up past the Scenic Caves, through Ravenna to the Beaver Valley Road (#13) up through Kimberley, and, back across the north side of Lake Eugenia, ending up at Mylar & Loreta’s in Singhampton for lunch.

20 members stayed for a good lunch and the presentation of the coveted Ear Muff Trophy, which was awarded to Bill & Sharon Rogers.

A great event, possibly assisted by the weather.  Thank you to all who attended.  Many thanks to Bill and Sharon for the photos and to Doug and Kate for organizing the event. 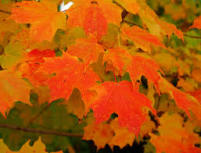 Al Tulloch led a Fall Colours tour on Thursday from behind Tim Horton's, First St in Collingwood, 11 cars drove about 50 kms, winding through the picturesque Pretty River valley.  Despite the cloudy weather, the Fall colours were excellent and we ended up in Creemore for lunch at the Old Mill House Pub.  Due to the poor weather forecast, there were only two British cars on the cruise (both Jaguars).

21 of us had a good lunch and then we strolled around the lovely village.  We drove home by various routes.  A few members visited Glen Huron and Giffen's Country Market and purchased some apples and their famous butter tarts. 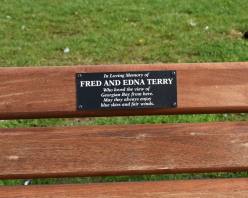 The Terry family dedicated a bench in memory of Fred and Edna at the Millenium Park, beside the grain elevators at the Collingwood harbour.  This had been a favourite spot for Fred & Edna.

Three members Jim Spruce, Neil Brydon, and Don Cooper along with Neil's wife Tannisse and Jim's friend Joe Young  drove from Elmvale.  They went past Orr Lake to Oro Township on a circular route to the African Church, which was the place of worship for Underground Railway slaves fleeing America.  From there we went to Shanty Bay Road to join Penetang Road and to the northeast end of Barrie to Heritage Winery. The wine tasting was enjoyed and purchases were made.

Continuing north to Craighurst, we were met by Jim's wife Sandy, and Joe's wife Cathy for lunch at the HQ Restaurant.  After lunch, we purchased homemade chocolates from Chelsea Chocolates.  A warm sunny day added to our enjoyment.  A pleasant outing enjoyed by all.

Many thanks to Jim Spruce for running this cruise for a total of seven GBBCC members in five British vehicles.

We met at Sunnidale Corners and had an enjoyable drive through the beautiful countryside in Essa Township to Barrie Hill Farms, where we bought some lovely fresh fruit and vegetables.   We then drove to Linda's Restaurant for a very good and social lunch.

It was a beautiful, sunny day and everyone had a great time.   Thanks, Jim.

Cruise to and visit of the Muskoka Discovery Centre - August 23rd, 2022

A group of four GBBCC members met in Collingwood and Graeme led them along some back country roads to Craighurst where we met up with three other members.

Taking some other lovely back roads, they drove to Gravenhurst where we met four more members outside the Muskoka Discovery Centre.  Vehicles varied from an MGB, a Spitfire several Jaguars, a couple of Audis, and a Porsche.

Dunc Hawkins organized a great tour of the Centre led by Ann Curley, the Operations Manager, and Curator.  The Discovery Centre is the leader in preserving, promoting and celebrating the culture and heritage of the Muskoka district.  Founded in 1973, it is a membership-based, not-for-profit registered charity with an ongoing objective of presenting compelling, entertaining and educational experiences, and attractions.

It was a wonderful tour with very interesting, educational exhibits and many wonderful wooden Muskoka boats.

After the tour, we adjourned to The Oar restaurant in Gravenhurst for a social gathering and a lovely lunch.  The group then dispersed and found their own ways back home.

Thanks to Bob Mills for taking many photos.  A very good event – many thanks Dunc,

A group of 23 GBBCC members met Klaus and Gordana Mueller at the Meaford Harbour Pavilion on a lovely sunny Wednesday morning.  Klaus led us on a lovely drive of a dozen cars through the scenic countryside south and west of Meaford, that included Hoggs Hollow.  We stopped at the Mueller's farm for a lovely break, looking at a wonderful collection of antique vehicles and various other collectibles stored in several barns.

Our hosts kindly provided a lovely seating area on their beautiful property with a variety of cold soft drinks and some nuts and crackers.  Klaus then took us on another lovely drive to south of Owen Sound, passing Inglis Falls and Grey Roots museum.  We ended up at the Mudtown Station Brewery where we had a good lunch on the terrace.

Many thanks to Klaus and Gordana for a wonderful outing.

Six cars were led by Graeme Wallace from Collingwood to the Simcoe County Museum for a casual car show in the evening where we met two other cars.  Two previous members of the GBBCC joined us in the grounds of the museum where we saw some very interesting exhibits and also were entertained by Sarah Gao with her excellent singing and ukulele playing.

I am pleased to report that the Club presented a very successful Show and Shine event at this assisted living facility in Collingwood.  The weather cooperated and the sunshine helped to show some beautiful cars to their best advantage.

It was an "all-inclusive event" with nine nicely prepared vehicles including two German Porsches (a brilliant 1954 Speedster,  a new red Boxster), and a Japanese "TVR" along with British cars: a Morgan, Jaguars, Spitfire, and MGB.

I estimate that 35 residents took in the show and lingered to speak with the car owners, many with stories about their past histories with similar autos.  I am not sure that our members didn't enjoy the show as much as the residents did.

Despite rather ominous weather in the morning, things cleared in time for the Clarksburg/Thornbury Parade.  Several vehicles made the start line.  Lead by a pride of Jaguars (a XJ8 Saloon, an X type Estate, 2 XKs) a  Morgan, 2 Triumphs (TR250 and Spitfire), an MGA, and a guest appearance from a German TVR it was a good showing.

Several members gathered at Sterling’s on the Thornbury Harbour for a great lunch after.  Thank you to all who turned out.  Doug Simpson

Ralph Kertcher and Jonna Chalmers organized this cruise of the beautiful lush countryside of Huronia (mostly Tiny Township) and lunch at the Fin City restaurant on the Delawana Resort property in Honey Harbour. Seventeen cars and thirty-two members tolerated this very sunny, hot but beautiful day.  Thanks to Bill Rogers for the photographs of participating cars. Despite the weather, the feedback suggested that everyone enjoyed the experience.

The cruise was in two parts, morning and afternoon.

The morning drive left the Wasaga Beach Walmart parking lot at 10:30 am with a fifteen-minute stop at the Waubaushene Esso station and arrived at the restaurant in Honey Harbour at about 12:30. The last eight kilometres from Port Severn to Honey Harbour provided some twisty bits for the purists. The draught beer at Fin City was cold, the food was excellent and moderately priced, and we were able to sit in the shade on their deck overlooking the water. Their staff managed our expectations very well due to the demands of their busy time and were very professional. The singer was also enjoyable, providing a pleasant backdrop on this great day.

The afternoon drive left the Waubaushene Esso station at 4 pm, about thirty minutes behind the planned time due to a needed ice cream stop. The route followed Hwy 12 to Penetanguishene and then Champlain Rd to Awenda Provincial Park and on to Tiny Beaches Road via Perkinsfield arriving back at the start in Wasaga Beach at about 6 pm. Four Jaguars in convoy made up the afternoon group. The road surface was in perfect shape with some twisting sections and the countryside was sensational. Awenda has a very forested canopy providing a shaded respite on this hot day.

Other participants chose to take the shorter way home. Perhaps the morning route, plus a lengthy lunch, was enough to satisfy most participants.

Note: A suggestion to a future cruise planner who wants to utilize this Awenda route would be to run the cruise in reverse with lunch at Penetanguishene, Honey Harbour or Port Severn. In our opinion, the Awenda route is the more spectacular of the two route options and should not be missed.

This was an excellent cruise, very well organized by Ralph and Jonna and it was much appreciated by everyone who particpated.

Peter and Sue Turton organized a wonderful cruise for about fifteen British cars and some 30 GBBCC members.  Despite the dull sky and a few spots of rain, we all met in the parking lot, behind Tim Horton's on First Street in Collingwood.  The lovely route took us up Scenic Caves Road and through Ravenna (did you know that Ravenna is on the same latitude as Grenoble, France and Turin, Italy at 40 degrees North).

By this stage, the skies had brightened and the sun came out.  The route took us through Feversham and across the causeway at Lake Eugenia, to Flesherton, and then down the steep road into the Beaver Valley which connected us past the Beaver Valley Ski Club  into Kimberley.  Everyone then enjoyed a lovely lunch at Justin's Oven.  After eating, some of the members enjoyed a visit to the Kimberley General Store.

This was a great cruise with a beautiful drive through lovely countryside.

Many thanks, Peter and Sue