The British Car Enthusiasts award is a medal type of award (similar to an Olympic medal), to celebrate any club member who has demonstrated great enthusiasm for, and robust knowledge about British cars as well as enthusiasm for club meetings and club events at the member club level. The British Car Council 'Order of British Car Enthusiasts' Awards program is for member clubs of the BCCI and the award was first presented in 2017. 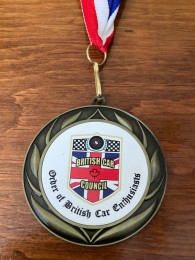